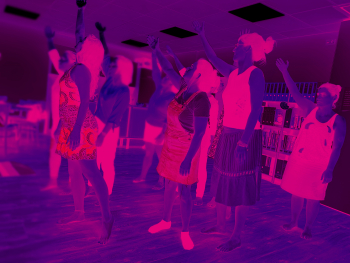 Since 1998, cultural work for migrant women has been a focal point of maiz. We are trying to develop and follow strategies in our work that facilitate our active participation as protagonists:

Active participation of migrant women in cultural work – starting with the development phase, conceptual design and organization to the point of the realization of a cultural project – plays an important part regarding the development of political articulation.

We oppose policies which merely allot us roles as objects within cultural displays and we support the critical examination of anti-racist and anti-sexist praxis within transphobia, homophobia and other forms of discrimination. We resolutely reject stereotypical, folkloristic displays of migrant women in order to be publicly heard.

Funding for cultural political work still is scarce. As a self-organization maiz not only has to fight for recognition but first and foremost for the constant financial support of migrant women. Our production of culture and art derives from the resistance against our own precarity and leads into progressive activism.

Celebration: In November 2010 we were granted the Austrian Federal Ministry's Award for Education, Arts and Culture for our project WIR und IHRtum.